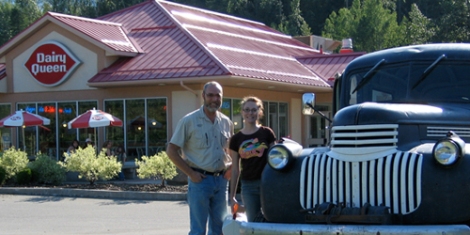 This week a young rich boy, tearing through Bangkok in the family Lambourgini, hit and killed a policeman. His next move reveals the greatest pitfall of succession.

Because he is the grandson of the man who built the Red Bull empire, one of the richest men in Asia, he grew up privileged. The policeman was dragged for 200 meters. The spoiled boy didn’t bother to stop, but raced home and hid the car in the parking garage. By the time the police found the car, he was already bribing his way out from under his folly. Most family business empires implode by the third generation.

I’m the grandfather of our ministry and a lot of people have sacrificed to get us here – that’s part of what makes the ministry so valuable. I don’t want to pass it to some kids who’ve never earned anything.

What should we expect from our sons, and how do we know we’ll get it after we’re gone?

1. Beyond my expiration date there must be continued expansion and I need to hear about it now. If my boys aren’t excited about and preparing for  long-term growth now, they will enter the future in maintenance mode.

2. Expansion must be paid for and I want to see a downpayment now. Elisha paid the price that Elijah had set; “follow me to the end, and you will receive a double portion.” But that was only the down payment. Elisha would face and conquer his own hardships and Elijah now knew he would.

3. Expansion must be taught to the next generation. I must hear talk of doubling, not just by my children, but by my grandchildren. God chose Abraham because He saw in him that he would teach his children and his children’s children after them. Teach them what? The purpose, the vision and the willingness to pay the price for a double portion increase in each generation.

I asked Matt & Becky (my daughter and son in law) to take this year in Canada to get some things ready for their next level of ministry. They are part of our succession team. Not only do we need them and miss them terribly in Thailand, but they can hardly stand to be away from this place of excitement and vision. This is their destiny.

Matt first came to Asia after he began dating Becky. He left her in Canada and came to attend our Bible college in Thailand. If they were to marry he would need to know the family vision after which she was so passionate. A year later he returned to Canada, they were married, and some of Becky’s Thai siblings moved in with them. This was normal life for Becky, she grew up with 32 other kids in the house, but it was clearly a great adjustment for a guy who grew up in a family of two. Matt learned how to use the bathroom as his private study chamber.

Honestly, these two are crying tears of homesickness for Thailand and the ministry here. This is one of the greatest sacrifices I have watched them make, and this one is for the future of the ministry, a downpayment, an indication of what they are willing to pay after I’m gone. They are part of a team that will own and double this ministry into their generation – and teach their kids to do the same.

What stops grandfathers and fathers from requiring a down payment?